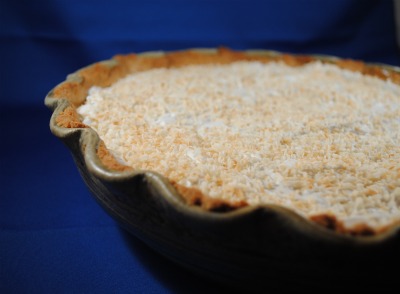 If you were not a fan of the Chocolate Peanut Butter Cream Pie from last week because you can’t eat chocolate (what other reason would there be) then you’ll love this gluten and dairy free Deep Dish Coconut Cream Pie.  It’s just as easy and you will definately get more coconut bang for your buck.

This is again another adaptation of Elana Amsterdam’s wonderful recipes.  As many of you know I really don’t like long recipes when it comes to baking and Elana doesn’t have any of those.  I don’t consider myself a baker but I’m starting to now.  Well I have to say that Elana’s Pantry makes such great recipes that even with my shortened baking attention span I can look like a baking rock star.

I also have a secret to share.  Lean in because I’m only going to whisper this once.  Her new Gluten-Free Cupcake Cookbook is on pre-sale for only $9.03.  If I were you I’d jump on that like ants to a picnic.  You never know when they are going to put that price back up to the regular list price.

OK so back to the Coconut Cream Pie.  Make sure when you purchase shredded coconut that you look for the highest quality and make sure it doesn’t have added sugar.  Organic is great.

So first you want to make the crust.  I used the Coconut Pie Crust recipe from Elana’s first cookbook, The Gluten-Free Almond Flour Cookbook.  It’s really great as it adds in coconut to the crust and uses coconut oil.

I then followed her recipe for Chocolate Cream Pie but I didn’t add in any chocolate.  Instead I just kept it vanilla.  Now it didn’t set up as firm as the chocolate but it still works great and tastes amazing.

I used my deep dish pie plate for this recipe as I wanted to capture every drop of filling and topping.

For the topping I added my Coconut Milk Whipped Cream and sprinkled it with toasted coconut.  This is my husband’s favorite pie and I was very happy to make it for him for his 50th birthday.  I’d offer you a slice but he ate it already. 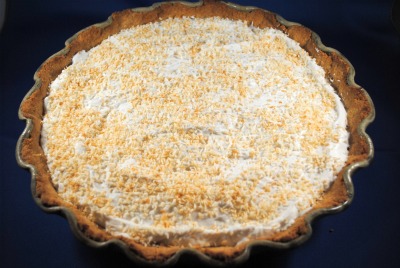