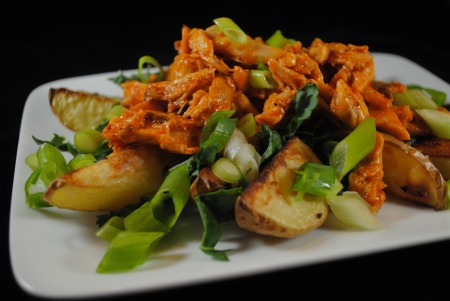 I like this recipe because it’s a healthy twist on typical buffalo chicken wings, which I obsess over, and it’s so much easier and less messy to eat.  It’s of course gluten and dairy free and delicious.  So as you settle in to watch the Final Four, which only 2 people in 6 million predicted on ESPN brackets, try this recipe so when the games are over you can still get off the couch.

This is fast easy meal that can have your tongue tingling.  It uses cooked chicken, home fries and kale.  It only took a little longer to make this than it took for the potatoes to cook.  You can even shorten that time too.

Now the most important part of this recipe is the wing sauce.  Find one you like the best.  I used Wing Time and loved how it was thicker and clings to the meat.  Amazon has The Ultimate Wing Sauce Collection – Wing-Time Buffalo Wing Sauce – Three Pack

or you can get them separately, Wing Time Medium Buffalo Wing Sauce

.  I’ll warn you the super hot will have smoke coming out your ears but the medium passed the “I hate hot foods test” by someone in our house.

Wash and cut up your potato into whatever shape you like.  I like fat wedges and get 6 per potato.  Toss them in olive oil, sprinkly with the salt and pepper and place on cookie sheet.  Bake in a 425 degree pre-heated oven for 20-30 minutes or until they start to brown.  Quick TIP:  Cut a small slice off the tip of your potato, stand it on it’s end and use an apple wedger for quick fries.  I cut the core piece length wise in half.

Now for the chicken you have many options.  I had some buffalo chicken wings I had frozen.  I do this with my leftovers right away.  I don’t like them the next day, but at a time in the future.  I pulled just the meat off the bones and mixed in Hot buffalo wing sauce.  Then I reheated it in the microwave.  You do the same with any cooked chicken.  If you are starting with uncooked chicken slice it thin and cook it up in a skillet, then mix in the sauce once cooked.

To assemble place your potatoes on the bottom, toss the kale on next, spoon on the chicken and sprinkle with green onion.

You choose how hot your wing sauce is but I like it hot.  I also have very hot and that really sets my tongue on fire.  I used Wing Time sauce which is a little thicker than Franks.  I found it at Whole Foods. Gfree Foodie reviewed this product.  They have a mild version which is great if you like the taste but not the heat.  You can also make your own sauce.

You can also change up the way you serve the potatoes.  You can cut your potatoes into cubes or shred them and cook it up in a skillet.  This dish has so many options so create it in a way that suits you best.  To keep it vegetarian sub out the chicken for tofu, lentils, beans or polenta squares all seasoned with the buffalo wing sauce. 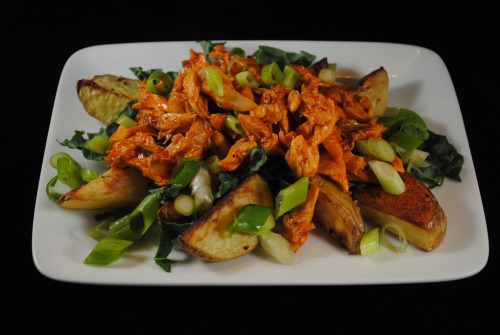