And The Award Goes To Revealed

This past week I wrote about an award that was given to me, the Memetastic Award.  I had to share 5 things about myself and only 1 of them was to be true.

I totally enjoyed all of the guesses but now it’s time for me to reveal which one is true.  I loved your reasoning behind each answer.  Brittany was the only one to say the right number although I think Shirley may have known.  We’ll have to see.

1. My favorite meal is to open a box of gluten-free Hamburger Helper- Well most of you new that this was the biggest lie of them all.  I’m a real food gal and don’t like all the preservatives and cr@p added to those boxes of gluten-free foods.  Good job!

2. I love when it snows.–  I’m not a fan of snow at my house where I live now.  No one can drive in it and people just don’t know what to do with the snow.  It creates all sorts of problems, it’s damp and cold and I really just don’t like it.  Now if it’s snowing somewhere I’m not than I guess it’s OK.  Especially if it’s where Melissa is skiing. So this one was a lie.

3.  I’ve worked in the food industry in Pennsylvania, New York City, Boston, New Hampshire, West Virginia and Virginia.- I’ve worked in the food industry in all of these places.  In PA I used to cater parties and worked at a pizza shop.  In NYC I was the Director of Marketing for a wholesale meat purveyor which was the coolest job. I could get any table anytime in NYC.  In Boston and New Hampshire I worked in corporate and government cafeterias as the chef.  I even worked on a submarine base.  In WV I had a catering company and sold low fat cheesecakes to the local restaurants and I ran the kitchen and created the menu at a local restaurant.  In VA I’ve worked in pizza parlors, catering and writing this food blog along with my cookbook.  So if you guessed this one than you were right.

4.  My collection of cookbooks out numbers my Harry Potter collection.- Well this one is a close tie.  As many of you know I love both but I have so many little and big Harry Potter items including tons of clothing that I actually have more than I have cookbooks.  Some day I should pull it all together and take a photo.  Then you’ll all know just how crazy I am.  Sorry this too was a lie.

5.  I used to babysit the kids of Philadelphia 76ers basketball team star, Doug Collins.– This was close to being true.  I used to babysit Dr. J’s kids.  Julius Irving from the 76rs.  His kids were great and the most polite kids I ever babysat.   Dr. J was extremely tall.  His crutches were way way taller than me and when he would answer the door he would look out the transom window above the door.  It was a great gig. 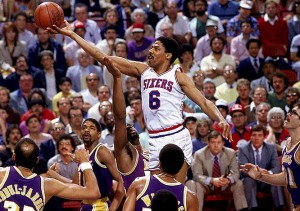 9 Responses to And The Award Goes To Revealed