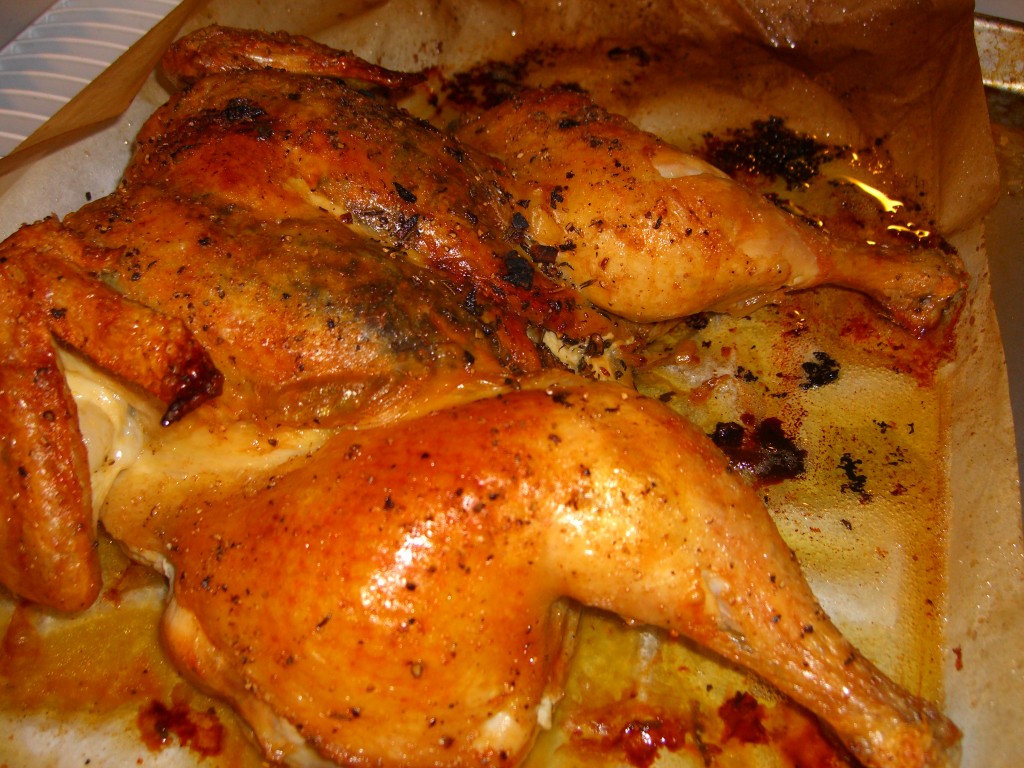 How would you like a really fast and easy way to cook a big bird and have it turn out so juicy and full of flavor?  Let’s say a whole chicken in an hour and a large turkey in 70-90 minutes.  Yes, a 12 pounder!  “No way!” you say.  Well if you spatchcock it, your bird will be done in no time and taste amazing.

I read about this in Martha Stewart’s Living Magazine and apparently so did Mark Bitten.  Correction!!!  That was Zach and Clay from The Bitten Word.  They also posted a Spatchcock Video  Demo. They just posted  Thanksgiving 2009:  Roast Spatchcocked Turkey.  When I saw Martha’s magazine I knew I had to give it a try.  So I started with a large whole chicken.  I changed up the recipe Martha Stewart gave and for the chicken I added a flavorful mushroom stuffing that I placed under the skin.

I will be sticking more closely to her recipe with my Thanksgiving Turkey with the addition of a paprika buttery spread.  It’s tradition in our family.

So what are the benefits for spatchcocking a bird?  Well, let’s see.  It’s cooked in no time, really easy to prepare, lays flat so you don’t need a big oven and you can cook other things in the oven at the same time.  Oh, and it’s a lot easier to carve.  I’m sold. How about you?

So what do you need to spatchcock and what exactly does that mean?  Well, all you really need is a pair of poultry shears or sturdy kitchen shears, a cookie sheet with sides or a jelly roll pan, and a little muscle.  Spatchcocking is just a funny sounding term for cooking a whole chicken or turkey by removing the backbone and splaying the bird out flat.  That’s it.

Now that I’ve taken the mystery out, don’t let on to your guests that’s all it is.  Just use this fancy term and impress your guests.

Stuffing for under the skin

large organic whole chicken- I had a 6 pound bird

First you want to make the stuffing that will be placed between the breast meat and the skin.  While this tastes good with the chicken, I wouldn’t use this same stuffing for a turkey.   Saute your garlic in a little oil on medium high.  You want the garlic to release it’s oils and then remove it from the pan before it browns.  You don’t want to burn garlic, it tastes really bad.

Next toss your sliced mushrooms in the pan and saute until brown.  Remember not to salt your mushrooms before they brown.  It will release the moisture in the mushrooms and then they will steam instead of brown.  When you’re happy with the mushrooms mix in the rest of the spices, add the garlic back in and combine.  Take off the burner and let cool. 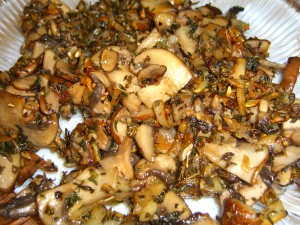 Wash and dry your bird. 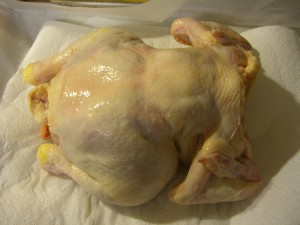 Next you want to take your kitchen shears and cut the backbone out of the chicken.  Cut straight down both sides of the bone beginning at the tail.   If you hit a tough spot try using the tip of the shears. 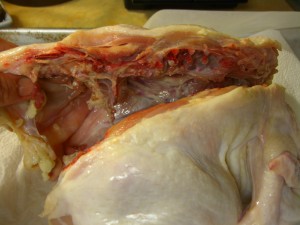 Now you that you have it cut open make sure it’s dry inside.  You can also take out any extra  fat and if there are any leftover giblets. 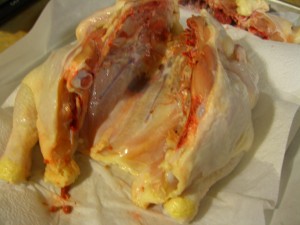 Then you want to turn it over and break the breast bone.  To do this you’ll want to make sure you have leverage.  For me that was standing on my step stool.  Place your hand on one side of the breast, close to the breast bone.  Now push down until you hear a crack.  This will take a little elbow grease.  It will be easier if you utilize that leverage.

Transfer the bird to your rimmed baking sheet.  Let your bird rest for 30 minutes.  While it’s resting mix together your basting mixture.

For the baking sheet, I used parchment paper but if you want to be able to deglaze the pan for juices to make a sauce or gravy, don’t use parchment or foil. 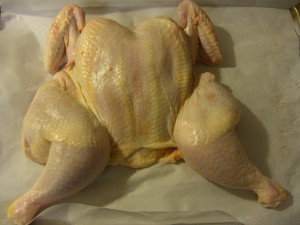 Time to stuff the bird.  Using your fingers first and then a knife if needed, make sure you can have space between the breast meat and the skin.  Sometimes it will take a knife to get through that filmy skin.  Take the cooled stuffing between your forfinger and middle finger and slide it up under that skin. 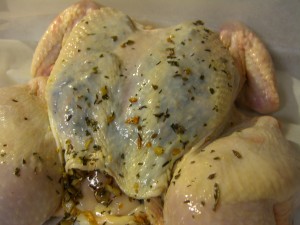 Time to oil up the bird.  Take the oil, salt and pepper mixture and baste the chicken.  You will want to do this again half way through the cooking process.  For my turkey I’ll add in paprika for that deep color. 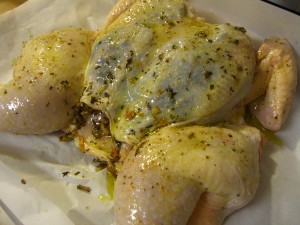 Roast at 450 degrees until the thermometer inserted in the thickest part of the thigh reads 165 degrees.  This should take around 50 minutes for a 6 pound bird.  For a 12 pound turkey it will take about 1 hour and 10 minutes.

Let the chicken rest 15 minutes and the turkey 20 minutes before you carve.

Roasted Chicken and Cauliflower with salad

How to carve this bird.

First you want to cut the legs from the breast.  Cut where the thigh connects to the breast.

Cut the drum sticks from the thighs at the joint.  Put this on your platter and cover with foil.

Cut the wing from the breast, then slice the breast.

If  you decide to cook your turkey this way for Thanksgiving too, take a photo and send it in.  We’ll have a spatchcock exhibit.