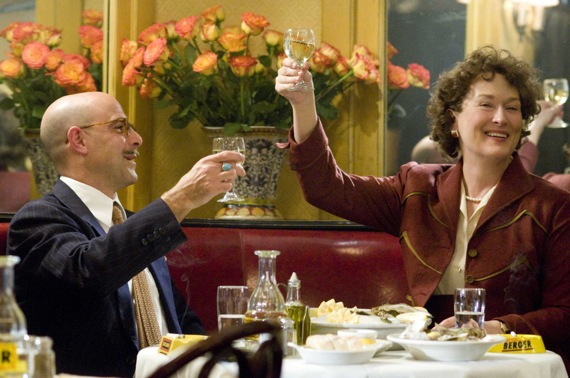 Julie & Julia opened on August 7th and my sweetheart and I went to see it.  We went at 1pm which is a great time to see a movie.  No crowds, costs less and I felt really young in the audience.   Before we went Scott had read the reviews of the movie which were not totally flattering.  I don’t like to read reviews so I can make up my own mind.  Actually I’m like that about most things but that’s a whole other post.

We loved it!  I would disagree with those who may not have liked the way the movie switches back and forth from Julie Powell’s life and Julia Child’s life.  They are totally missing the point and the message.

For those who have not heard, Julie Powell decided to cook her way through Julia Child’s cookbook, Mastering the Art of French Cooking.  She would cook all 524 recipes in one year and blog about it along the way, in 2002.  This was early on in the blogging world and a brilliant way to get herself noticed as a writer.   Well it worked and she was offered a book deal and then her book was made into a movie.  From a food blogger’s perspective like mine, that is very cool. 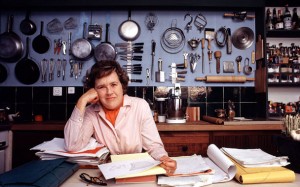 Julia Child in her kitchen

Now I’ve only just begun to read the book on my Iphone so I don’t know how the book compares to the movie but I loved how we got to see a glimpse into the early life of Julia Child in the movie.  It took her and her co-writers 8 years to complete her cookbook.  When published it was so different to the American cookbook scene that it took them a few rejections from publishers before someone agreed to publish it. The world of food has never been the same, especially in the U.S.

I really enjoyed the relationship shown on screen between Julia and Paul.  They seemed like each other’s best friend and confidant.  He supported her endeavors and asked her important questions like, what do you really love.  Julia really loved to eat which led to her attending  Le Cordon Bleu Culinary School in Paris.   I could watch an entire movie with just Stanley Tucci and Meryl Streep.  They are amazing actors and draw you so completely into their characters that you totally forget a few years ago they were together in The Devil Wears Prada.

Amy Adams is adorable in anything she does.  She did a great job of portraying an over emotional writer living a life she would like to change.   They managed to cut her hair and dress her in unflattering clothing so you would not be thinking of Giselle from Enchanted.  She drew you into her character with all of her flaws.

I really enjoyed this movie and would recommend anyone see it.  But if you ever watched Julia Child, cooked from one of her recipes, love food and love to cook then you should see this movie.  I hope this movie will inspire people to get back into the kitchen and cook real food from real ingredients just the way Julia Child inspired cooks for many years and still does today.