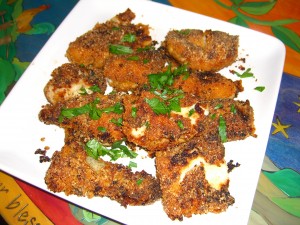 to coat the pieces of haddock.  Coconut flour is sweet which is what I was going for but totally not what they were expecting.  The corn on the cob was topped off with a little raw honey, chives and Celtic Sea Salt.  The tomatoes are pretty self descriptive.  The suggestion was made that some type of sauce be served with the fish like a mango chutney.   Good idea.  Where were they when I was grocery shopping and cooking.  Next time I’ll make a chutney too.  Maybe as soon as tomorrow for the leftovers.

My goal was to keep the meal gluten free, dairy free, soy free and low cost.  Since I bought the fish when it was on sale and local produce I saved a bunch of money.

So here are the recipes.  Try the fish at your own risk.  If you want a less sweet fish use another type of gluten free flour.  There are so many to choose from. 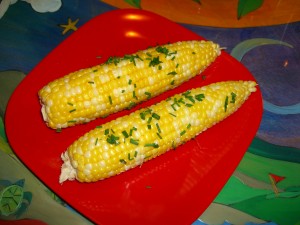 oil for the pan

coating mix was as follows- first into the milk, then into the flour, then back into the milk and next was the corn flakes with the last stop into the frying pan.

When they came out of the pan I tossed a little salt on top.  They were really crispy and a little sweet.

Fresh ears of corn cooked (I use the microwave for 2 ears).  When they are done spread a little raw honey on top and snip some garlic and regular chives on top.  Of course I love a little salt too.

Thick slices of your favorite Heirloom tomato.  I used Yellow, most people like green but you pick your own color.  I got 4 slices from one tomato.

I used the same process for the coating process except I added red and black pepper to the corn flakes and just used plain hemp milk, no honey.

First into the milk, then into the flour, then back into the milk and next was the corn flakes with the last stop into the frying pan.  Again I sprinkled them with salt right after they came out of the frying pan.  This was the first time I’ve ever eaten or made fried tomatoes.  I can tell you it won’t be the last.  They were delicious! Crispy, sweet and juicy and everyone eating them agreed they were good.

So the next time I fry fish for the family I won’t use coconut flour but I’ll keep playing with the corn and tomatoes.  I love options.

I’d love to hear from you how you make your dairy free, soy free, and gluten free corn on the cob taste great. 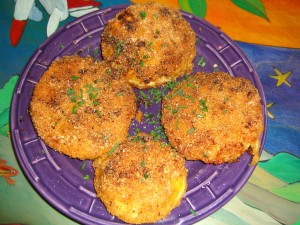