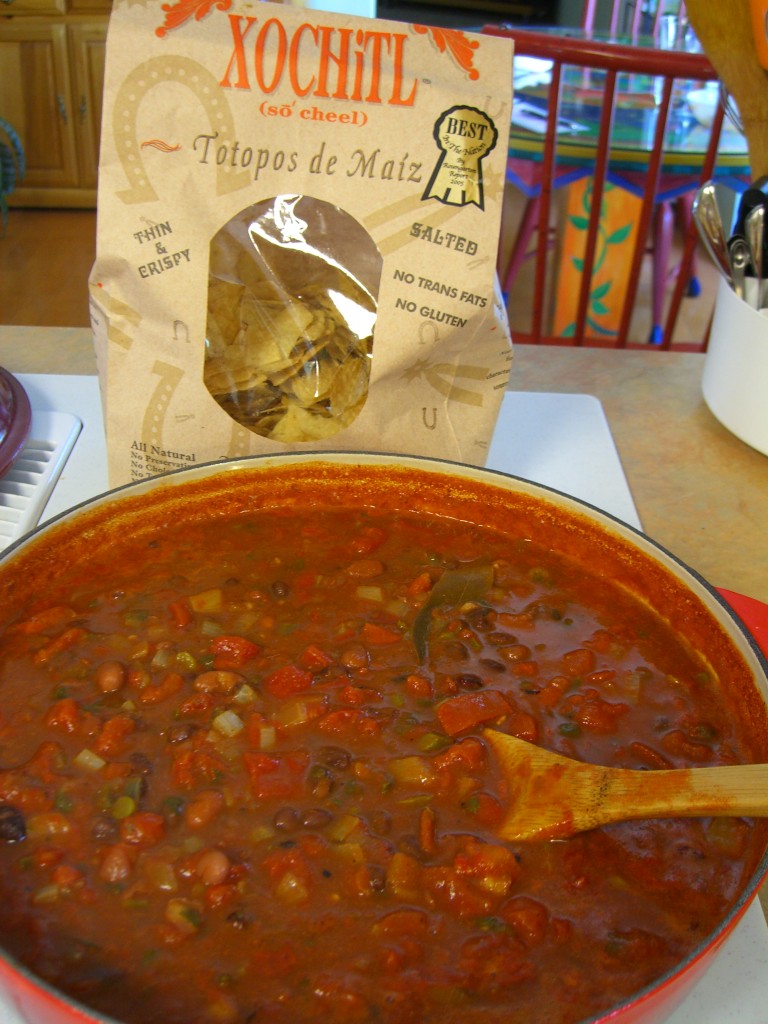 Some like it spicy, some like it hot and others like it to burn the @#*!! out of their mouth, eyes watering clear out your sinuses red face hot.  I’m in the middle, my son Andy I believe just loves it as hot as it can be. I think it started when we were out to eat and he was around 13.  His dish had a devil toung pepper, which he ate.  No one told him it was in there and to watch out for it in the dish.  I thought we were going to have to take him to the hospital.  I think after that everything else is mild in comparison.

So with inspiration from Andy and Shirley’s Tasty Tortilla Soup at Gluten Free Easily, I made Chili Piquin Vegetarian Tortilla Soup.  If you are not familiar with Chili Piquin they are small, red, fiery hot peppers that are grown and used throughout Mexico and the American Southwest.  They pack 140,000 heat units according to the Penzey jar.  However, while searching for heat units of other peppers they are most often noted as 40,000- 58,000.  Either way, they are hot.  To give you a comparison jalapenos are 2,500 -8,000 heat units and the devil toung that Andy ate is listed as 125,000 – 325,000 heat units.   Check out the Chili Heat Scale to find out how the scale was created and where your favorite peppers stack up.

The Chili Piquin jar says “USE WITH CAUTION.  Add 1 or 2 to Mexican moles and sauces, stewed meats and vegetables, Pazole and other corn recipes, barbecue sauce and hot and sour soup”.  I’ve used only 1 or 2 in the past but I didn’t think it was that hot.  So today, I was feeling more adventurous and added 12.  I also added 1/2 cup of diced jalapenos.  Oh we’re cooking with fire now!

Now if this is too hot for you take it slow and easy.  Add in what you think will work, let it cook to infuse, and then taste it.  Keep in mind the longer the soup sits, the hotter it will get.  You can always add more heat, but it’s really hard to get rid of it once it’s there.  Keep the bag of tortilla chips handy and if you can drink milk a glass.  They say that the casein in milk is what counter acts the heat.  For those of us who can’t eat casein, we’ll just have to endure.

I like to serve my soup with tortillas to top it off.  I really like Xochitl chips.   They are thin and crispy.   You can also top it with fresh avocados and even sour cream if you eat dairy.  That will help cut the heat.  Enjoy!