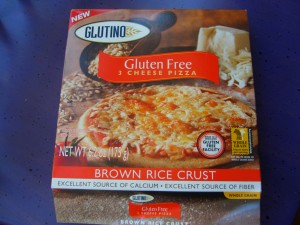 Who better to taste test a pizza than my 15 year old son who loves pizza.   He use to live on delivery pizza but now that he lives gluten free and our options have changed.  I purchased the new, 3 cheese brown rice crust pizza from Glutino when I attended the Gluten Free Fair Day at the Whole Foods Market.  I paid $4.99.  Lucky for my son I cannot eat rice so he became the taste tester by default.

Last night’s dinner plans changed so it became the perfect chance to slip him this pizza.  It was easy to make in the toaster oven and is definitely a single serving for most people.  I cooked it, sliced it and served it.  This night he was working on a school project so off he went with his pizza.  A little while later he arrived back requesting more pizza.  I asked if it was good and he replied, “yeah, really good.  Can you buy more?”  If you have a teenager you know not to expect long sentences and by those standards that was a long reply.

So there you have it, one teen boy’s review of the new 3 cheese pizza from a box.   I will buy more to keep on hand for the occasional quick meal for a teen.   This is also something he can serve to his gluten eating friends, which can often be a challenge.    Now if I can just get him to eat tomatoes that are not in a sauce on a pizza.

← Gluten Free Fair Day!
Vinegar Does the Job for Less →