While craving deep fried food is easily placated for most people but if you eat gluten free you know you don’t just run out to the local pub and order up onion rings and fried oysters. That life is gone and good riddance. Now we have the opportunity to create our own fry haven. So grab your hair net and fry pan and let’s get started.

I began by searching the web for some recipes and came across a few that sounded good. Gluten Free Mommy was a possibility but it called for too many items I can’t eat. Celiac.com had another but it called for eggs and my husband is not eating those. I didn’t think the egg replacer would work here but who knows, it may have. I find the fewer the ingredients in recipes the easier it is for me to cook for my family. I did find a few recipes that made a batter for the onions but I think less is more. So I made up my own and it was so good I almost ate them all before taking a picture.

So here it is, real simple. 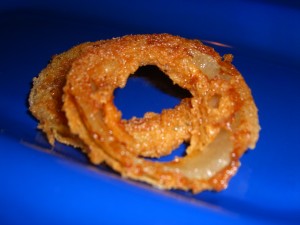 I grabbed my iron skillet and heated the oil on medium high. Next I peeled and sliced the onion. Toss it into the coconut milk to soak a little. The really cool thing was the onion rings didn’t taste like coconut. Not that I don’t like that taste, just not on my onion rings. Next toss them into the flour mixture so it is coated all the way around. Put them into the pan. Be careful the oil is hot and it could spit. Turn when bottom is golden brown. Take out when both sides are golden brown. I also sprinkled them with a little more salt. I love salt on fried foods.

I was on a roll so I made fried oysters to go with the onion rings. I rinsed the oysters and tossed them into the coconut milk. Then I dredged them in Corn Tortilla Crumbs mixed with the Black and Red pepper. I tossed them into clean oil again until both sides were golden brown. Next time I’ll add some of the tapioca flour to the help the breading stick better. These were great together with my homemade ketchup recipe. No photo as they were snapped up too fast.

My only problem with frying this was the crumbs from the onion rings settled in the bottom of the oil and started to overcook which made the oil dirty. I had to get rid of that oil and start with clean oil before I cooked the oysters. I don’t fry that often so if there is an experienced fry cook out there that knows how to avoid the burnt crumb syndrome in the oil please leave me a comment.