I know, I’ve become obsessed with shrimp sliders and shrimp seems to go so well with other S words like sriracha and southwest.  I think this one was my favorite shrimp sliders so far although a few more idease have popped into my head that I’m going to try.

I love getting those bags of frozen raw peeled shrimp that are ready to use.  They’re not big but it doesn’t matter.  The price is usually good and I can keep them in the freezer for when the urge for another shrimp slider hits me.

For this recipe I actually prepared some of the ingredients ahead of time.  Not something I’ve been doing lately but I wanted the corn, onion, celery and pepper to be a little charred before I mixed it with the shrimp.  The result was a great taste and texture.

I did let my shrimp thaw so they were not wet and filled with ice.  Works much better than trying to thaw at the last minute under water.

Also the night I made these I had great intentions on dicing up an avocado for a salad to serve along side but we went out for a long walk and by the time we got back it was late and we were so hungry.  But no reason you can’t create this addition.  I was thinking of a chunky salad with the avocado, some tomatoes, red onion and black beans tossed with lime juice and cilantro.  If you do this let me know what you think.

Also the sauce you see here is my fast and easy Sriracha Mayo.  The ratio is 1/2 cup of mayonnaise to 1 tablespoon sriracha sauce mixed well.  If you like it hot you’ll need to add in more sriracha sauce.  Also as a side note, these are good cold too.  Had a taste the next day so these would be good for just about any occasion. 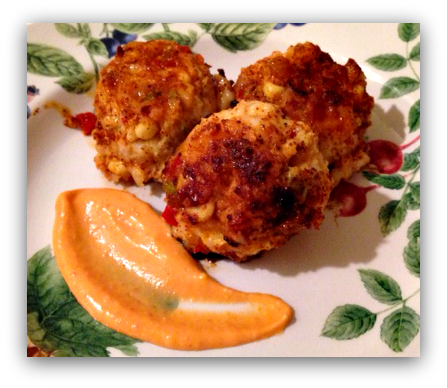 Saute one at a time the onions, pepper, celery with garlic, and then the corn.  Always do the corn last so you can grab any of the dark bits left in the pan to give that corn some char.  Set this all aside in a large mixing bowl.

Into your food processor add the shrimp and mayonnaise and pulse until you have the consistency you like.  I don’t want mine to turn to mush because I like to have visible bits of shrimp so I pulse.  Just remember you can always make the shrimp smaller.  Add this to your mixing bowl plus the seasonings and combine well.

I like cook up a little tester slider to see if I have the right amount of seasoning for my tastes.  You might want to do the same.

Using your scoop whatever size fits your fancy, add your sliders to a pre-heated large skillet on medium high that has the coconut oil melted in it.

You can flatten them out or leave them round.  I sprinkled some seasoning on top of the sliders on each side as they cooked for a little extra spice.

Once they brown on one side flip them over.  The second side will not take as long.  Mine took approximately 4-5 minutes on the first side and 2 on the second side.

Serve with the sriracha mayo and avocado bean salad.

Here are some of the options for tools.