Hi there, figured I’d introduce myself before launching into this review. I’m Andy, astute followers of the blog will know that I’m Diane’s son. What you probably don’t know is that I’ve just recently moved to San Francisco, and I’ll be popping in here and again to give some reviews of gluten-free restaurants and such around San Francisco. From a gluten-free perspective, I’m the only member of the family that’s not highly-sensitive to gluten. That said, I’ve spent the last five or so years eating gluten-free cuisine pretty regularly, and watching both my mother’s gluten-free cooking and commercial offerings improve tons over the course of that time. 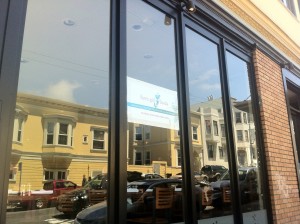 If you’ve stayed with me this long, thank you! Here’s the review I promised. The weekend before last, I headed out to the North Beach neighborhood of San Francisco to have a Gluten-Free brunch at the Farm Girl Foods pop-up. Farm Girl Foods appropriated the space normally occupied by Campanula, a bistro restaurant I’ve not yet had the chance to try. After running across the street to grab some cash from an ATM (Farm Girl was cash-only for this event) I got settled and perused the menu. As a vegetarian, it’s always nice to see multiple, well thought out veggie dishes. Farm Girl didn’t disappoint, with a third of the menu being vegetarian-friendly. Better yet, the whole of the menu was available gluten-free. 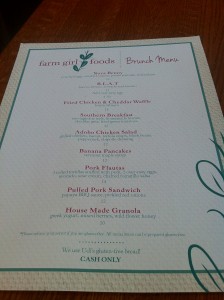 After a few difficult minutes spent attempting to decide between banana pancakes or the southern breakfast, I saw a plate full of eggs, biscuits, fried green tomatoes and grits on its way to another table. Problem solved. A short wait later, and I had a nicely plated bunch of brunch. Always somewhat skeptical of gluten-free flour mixes, I went straight for the biscuit. It didn’t disappoint! Gluten-free baking can occasionally be a bit dry and mealy but the biscuit from Farm Girl Foods was anything but, being as flaky and fluffy as almost any I’ve had, gluten-free or otherwise. The eggs were similarly well prepared, and like the rest of the meal, cooked in separate, gluten-free cookware.

The last portion of the meal were the cheddar grits. This was the only bit that I felt was at all lacking. The grits themselves had the right texture, however, even with the inclusion of the cheddar cheese, they were a bit on the bland side. Grits are a pretty tough thing to get exactly right, and these were by no means bad. Nonetheless, they could have used just a bit more flavor in the way of either spices or a sharper cheddar.

As a whole, Farm Girl Foods put together a fantastic offering, and one which I’m disappointed I didn’t get to eat more of. In speaking with the owner, Vanessa Phillips, I learned that there are very tentative plans for a more permanent restaurant in the Bay Area. I’ve got my fingers crossed it happens soon.

So, Farm Girl Foods pop-up earns itself a 4.5/5 stars on my first review of Gluten Free in San Francisco!