It All Ends Here -Gluten Free at Hogwarts Part 2

I am very excited to host this month’s edition of Go Ahead Honey, It’s Gluten Free.  This is the monthly blog event created by Naomi Devlin from Straight Into Bed, Cake Free and Dried.  Each month a new blog hosts with a different theme.  August 2011 will be hosted by Shirley of Gluten Free Easily with just the sort of thing you want when the heat of August hits – Dishes So Simple, No Recipe Required!  Check out the whole schedule through May 2012.

I’m not sure if you have heard about the amazing things that happened at my alma-mater Hogwarts but I must share.  It was an amazing event and I was even part of what happened.  For me it all started when I went to the market one day.  I was in the produce aisle and someone bumped into me except there was no one there.   I had a sneaking suspicion who it might be so I made sure whoever it was couldn’t get past me.  Then I whispered, Harry, is that you under the invisibility cloak.  A soft whisper came back, no it’s Hermonie but please don’t say anything.  I assured her I wouldn’t and offered to make them a meal and hide them for the day. 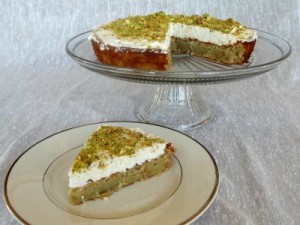 See everyone knew she, Ron and Harry were on the run.  Some of us had an idea it was something that Professor Dumbledore had left them to do after his death.  The poor kids were famished.  I guess it’s hard to live off of whatever mushrooms or berries you find along the way.  I was just putting the final touches on a lemon white bean cake with pistachio lemon topping that is As Good As Gluten according to my friend Lauren.  They sat down and devoured almost the whole cake plus being a Gluten-Free Homemaker like Linda, I had a fruit pizza on hand too.

They shared with me that they were in deed on a special mission but they couldn’t tell me anything more.  They couldn’t stay long so I didn’t get to make them any of my favorites from A Gluten Free Hogwarts.  But with City Life Eats I was able to share with 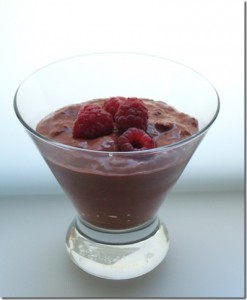 them some raspberry chocolate pudding that Valerie created.

I really wanted to help them in any way I could and the only thing I could think of was getting them food.  They never knew where they were going to apparate to next or if they would get food.  They were running from You Know Who.  I had to figure it out so how to get around this Daily Dietribe.  So I sat down with some fruit and herb salad and summoned my inner wisdom, Iris.

Finally, a solution came to me.  I arranged to have some treats available to them whenever they could summon them.  It took a special kind of magic to send it to them since the Floo Network was being monitored and so was any portkey I could whip up.  Hanging out with the houseelf Doby I learned a few tricks about food appearing out of nowhere.  He was a very kind house elf. 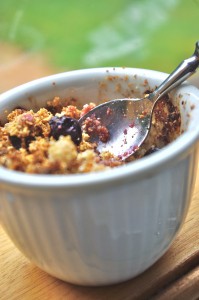 So I got busy baking and making treats.  I had KateAlice Cookbook’s recipe for apple blueberry millet crumble.  Something they could heat up on the fire if they wanted.  And then for more Daily Bites I made raspberry brownie bites.   I sure hoped they were getting all of these treats including a Tasty Eats From Home of  healthy chocolate zucchini muffins.  Hallie and Alta thought they could carry some with them in Hermonie’s bag.  She seemed to be able to fit all sorts of things in this tiny bag of hers. 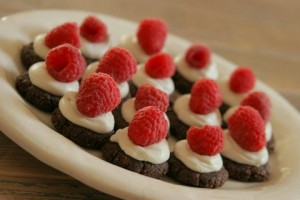 That’s all I ended up sending before I heard they were captured by snatchers and taken to the Malfoy manor.  Somehow they escaped and headed to Shell Cottage where Ron’s brother and sister-in-law lived, Bill and Fleur.  I was happy there were finally somewhere safe and where they could get a good home cooked meal. 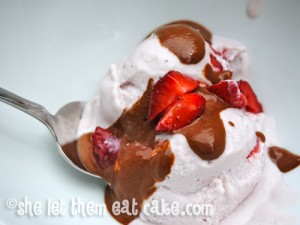 Fleur is a wonderful cook.  I heard She Let Them Eat Cake every meal and made a decadent chocolate sauce for ice cream too.  My friend Maggie would have loved that.  Well of course they liked that And Love It Too when she made them molten lava cakes.  Wouldn’t that make your day Sunny!

There is one thing that Fleur is great at is Faking it Gluten Free Style.  Every morning they woke to spiced peach cupcakes.  Well 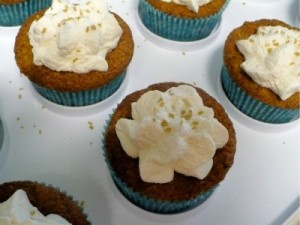 you know, muffins and cupcakes are really the same thing says Terri.  I heard she even bewitched egg cakes baked in eggshells which she served with Z’s Cup of Tea.

They had to stay at the cottage for some time while they worked on something.  I come to find out it was a plan to brake into

Gringots the wizarding bank.  They say it’s the safest place and no one has ever stole anything from there.  So once again they were off and without food.  I’m not sure why they didn’t take any of the coconut chocolate cookies from the RA Vegan or the carrot cake that was Gluten Free, SCD and Veggie. 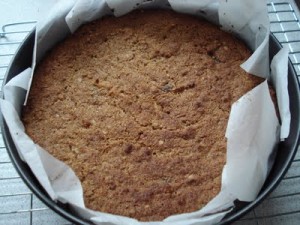 Well believe it of not they did manage to break into the bank and get out safely.  Then for some reason they headed off to Hogsmead, the village near Hogwarts.  They almost got caught too.  Thankfully Aberforth, Professor Dumbeldores brother, helped them to safety and fed them some ginger cake with lemon cashew frosting after he got rid of the Fox in The Kitchen. 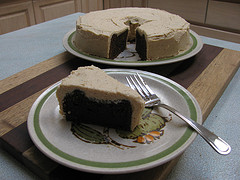 Well the next thing you know they are running around Hogwarts and there are not just a few death eaters or snatchers after them but hundreds.  All of their friends were there to help Harry, Ron and Hermonie along with those in the Order of the Phoenix plus the teachers of Hogwarts.  Molly Weasly fought fiercely to protect her daughter and even I showed up to see if I could help.

The battles took place all over Hogwarts and the grounds. The fighting was fierce and people were dying.   It’s just too sad to tell you all the people we loved that lost their lives fighting. But they never gave up and they never handed over Harry to Voldemort.

The castle was mostly in ruins or on fire and you should have seen the explosions.  At one point we all thought Harry was dead and Voldemort wanted everyone to just join him.  Can you imagine.  Well you know how it ended.

With the battle finally over, everyone gathered in the great hall.  We had warm drinks and the house elves brought us all some treats.  First I had raw cashew cheesecake as I listened to the Adventures of Pip.  I was Gluten Free and Loving It eating orange sherbet with Rogene and we were living gluten free easily with the watermelon sherbet and a bonus milk shake from Shirley while Adrienne felt like a Whole New Mom eating chocolate almond chip coconut milk ice cream.

It’s 19 years later now and life has moved on but not a day goes by that I don’t think about Harry, Ron and Hermonie and everything that happend.  How brave, clever and quick on their feet they were.  I will always treasure the time I spent with them throughout the many years.  They are filled with many wonderful memories.  It’s sad that part is all over but it’s good to know that “Hogwarts will always be there to welcome you home.”  shared J.K. Rowling at the London Premier.  Thank you Jo. 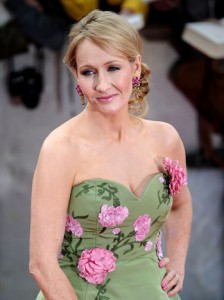 My biggest thrill was getting to go to the NYC premier and be just feet away from the stars of this movie.  If you missed my story click here.