You might be wondering why on my health coach and gluten free food blog I would be writing about this event.  Well first it’s important to do things you enjoy, read books you like, see movies that entertain you and make sure you are not working all the time.  Second and most importantly for me, I GOT TO GO! 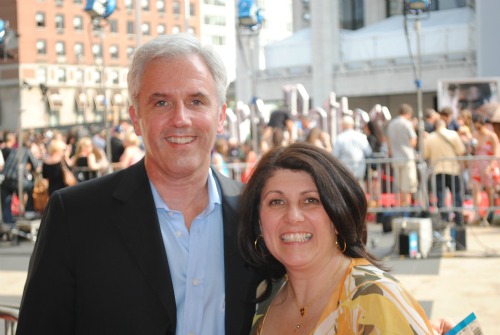 For those of you who know me I am beyond a huge Harry Potter fan.  I have loved the books from the first time I started reading them just to see what on earth was occupying my oldest son.  He’s grown up reading these books and so have I.  Well not in years but in life.

If you have not read or seen any of the movies I am in a way, jealous.  You have the opportunity to let them unfold for you for the 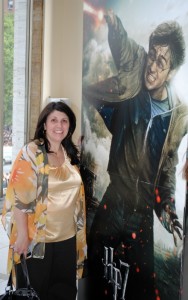 first time.  They are wonderful books filled with love, learning, grief, trials and tribulations, history, past literature and a whole new world to learn about.   I was just going to read the first book to get an idea of what my son was reading.  I was on vacation and had some time.  Once I started the first book I couldn’t put it down.  I don’t think I made dinner that night.  The next day I had to find a bookstore with the second one so I could read that too.  This was odd for me.  You see I really didn’t spend much time on reading, especially for pleasure.  Being dyslexic I had always found it a chore, until I started reading J.K. Rowling’s books.

My son and I would talk about our predictions for the next book as we anxiously awaited them to be released.  The movies started and we would do the same wondering what they would leave in or cut out.  It’s been a wonderful ride and I’ve loved every minute. 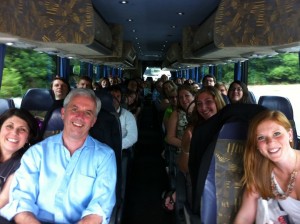 Our local radio station, Mix 107.3,  was running a contest to take some of their listeners to the movie premiere in New York City.  I of course entered as I have every other contest out there to win a trip or something having to do with Harry Potter.  I really had forgotten that I had entered and when I received a call from a DC area code I had no idea who it could be.   I almost didn’t pick it up because I was watching the World Premiere in London for the movie on my computer.  See I told you I was obsessed.  When I answered and they told me I had won I think I almost jumped through the ceiling.  I couldn’t stop smiling for days.

I was told I could bring one guest.  My oldest son who had

introduced me to the books thought he deserved to come and my husband who puts up with my obsession (and funds it) wanted to come too but he has not read most of the books.  It was a hard decision and I told my son he did deserve to come but I took my husband.  10 hours on a bus with someone, I had to choose wisely.  I wish I could have brought both of them.

Monday was the big event.  We loaded on the motor coach driven by a wonderful man, Clarence.  Our chaperone from the radio station was Jimmy Alexander.  He is also a big Harry Potter fan and a ton of fun.  We headed to NYC to Lincoln Center.   We arrived early and with it being brutally hot out they let us wait in the air conditioned bus.  When we got off the bus we walked right down the Red Carpet. How cool is that! 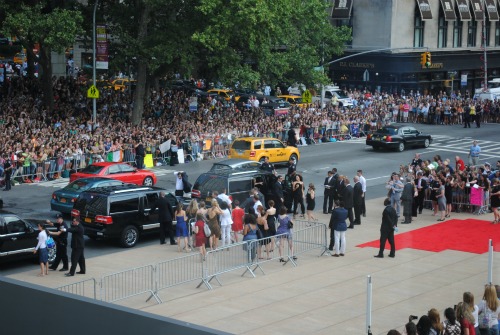 Stars arriving, people across street camped out for days

We had to go inside right away so we didn’t get to watch them all arrive individually and be photographed and interviewed.  We were inside watching it on our iPhones.  Silly but true. 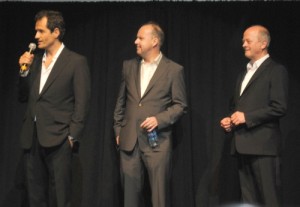 After some time David Heyman, the man who produced all of the Harry Potter movies came out on stage.  Then the other two David’s joined him, David Barron who produced all of the movies but two and David  Yates who directed the last four Harry Potter films.  Joining them on stage was Steven Kloves who was the screen writer who turned all but one of the books into screen plays.

The producers and director talked as well as the younger actors.  I was hoping Alan would say something but he didn’t.  I was only 7 rows from the stage so I had an amazing view.  It was so fantastic to see these people in person who I have watched for so many years.  After they spoke they left the stage to take seats in the audience.  I think I would have passed out if one of them sat down next to me. 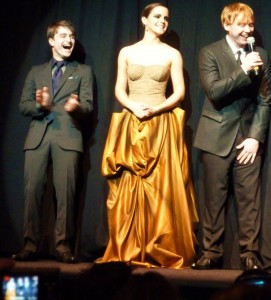 someone shouted we love you Rupert photo credit Jimmy Alexander

The audience was not  full of just fans like me who had won a trip but there were  a lot of other industry people.  Many actors came and were scattered around the auditorium.  Just behind us was Ariana Grande who was taking a lot of photos with fans.  She’s on a Nickoldenon show called Victorious.  Also in the crowd was Matthew Broderick and his wife Sarah Jessica Parker.  Jay Manuel from Canada’s Next Top Model show was there and he sparkled from across the room.  I also saw Michael Chiklis from No Ordinary Family, The Shield and Fantastic Four.

One of the funniest things I thought happened to Scott.  He was walking into the men’s room and he walked right into the guy coming out.  He didn’t stop to notice he had just crashed into Joey Fatone from Nsync.

After the event I only saw David Heyman and David Yates hang around.  I did manage to get to thank David Yates and get his autograph in my British copy of The Deathly Hallows.  I was hoping to get more autographs but just the experience of being there was worth so much more.

It was an amazing event.  Let me also say that the movie is wonderful.   We watched it in 3D which usually bothers me but not this time.   They did a great job with it and it’s not over done or gratuitous.  It just flows.  If you are a big fan of the books I don’t think you’ll be disappointed.  I don’t want to give anything away but all I have to say is bring tissues.

The movie comes out in theaters at 12:01 am July 14th or July 15th to those who don’t have tickets yet.  I hear it’s selling out all over the country.  I have my midnight tickets and yes I will be there with my son.   We’ll be seeing it in 2D so it will be interesting to see the difference.

Well I can’t thank Mix 107.3 enough for making a dream of mine come true.  It was an amazing experience.  To be so close in a room with the producers, directors and actors who have brought these wonderful books to screen for the last 10 years was just amazing.  If you have not read the books and you think they are just for kids, well you are completely mistaken.  They grow in complexity and deal with more and more adult issues as they go on.  I’m not sure why you waited so long but why not venture into the world of Harry Potter.

Don’t forget this month I’m hosting Go Ahead Honey, It’s Gluten Free.  The theme is It All Ends Here! Read all the details. 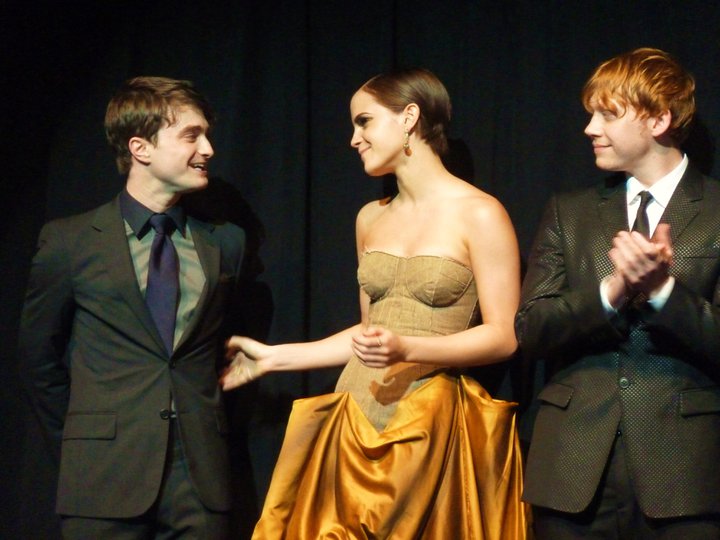