This month I adopted Kim from Cook It Allergy Free.  Yep the same Kim Maes I shared with you on Wednesday.  Every month Book of Yum has this great event where we adopt a gluten-free blogger, make one of their recipes and share our experience.   This month it’s being hosted on Lexie’s Kitchen.  So coming in the next week or so you’ll see the entire round up with all of the adoptees over at Lexie’s Kitchen so keep checking.

As I was searching through Kim’s blog I made a list of about 10 different recipes I wanted to make.  It was hard to pick just one but with a limited amount of time I had to make the hard decision to make her Best Ever Brownies.  Earlier today I shared my story of great memories being a kid and making brownies with my mom on Change My Life Journal.  She makes the best ever brownies with gluten and dairy that I’ve ever tasted.  I wish I could still have them.  Her baking is really the only thing I miss living gluten and dairy free.

I read through Kim’s recipe and it called for melting your favorite type of butter, mine being Earth Balance soy free version.   There was also Coconut Palm Sugar which I had on hand and wanted to take it for a spin since I had yet to try it out.  Wait there was also eggs, vanilla, almond flour and walnuts.  This recipe was very similar to my mom’s except she used regular flour, butter and Baker’s chocolate squares.  It was my job to keep an eye on the pan as the chocolate and butter would melt.

Kim’s recipe even said to beat vigorously for 60 strokes after adding in the flour.  My mom always gave me a much higher count.  I’m thinking it was something like 200 strokes.  I just remember my arm felt like it was going to fall off and I would need mom to jump in and help me finish. 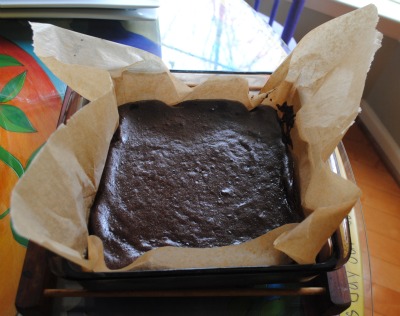 I baked the batter in a square pan that I lined with parchment paper instead of foil.  Honestly I didn’t want to mess with oiling the foil since I don’t use spray oils as they contain soy.  Well they used to and I’ve not gone back to check so I don’t have any on hand.  Yeah I know I still could have greased the foil but I was just being lazy.

While making these brownies the smell coming from the pan really did remind me of making brownies with my mom.  They smelled the same.  It was a lot of fun to make Kim’s recipe too.

So now I have 16 squares of delicious brownies in my house.  I’m catering our yoga party to celebrate the completion of the 40 Days Commit to It program Scott and I participated in.  I may toss in some of these brownies to share so I don’t eat them all myself.  Oh I guess I could share them with my family too but I don’t want any of us going overboard.

So if you like brownies and you want a fast easy recipe than you’ll want to make Kim’s Best Ever Brownies.  Head over to her blog now and snatch that recipe.  If you’re interested in her Fudgy GF Brownies or Butterscotch Blondies than you need to use your iPhone or iPad to get her Cook it AF app.  It’s great because you can customize these recipes according to your needs, save that into your recipe box and create a shopping list from the recipes you want to make. I love that.

OK, now I just need to figure out what to do between now and the party tomorrow evening so I don’t eat all of those brownies!  Maybe I should leave them on this chair on my front porch.