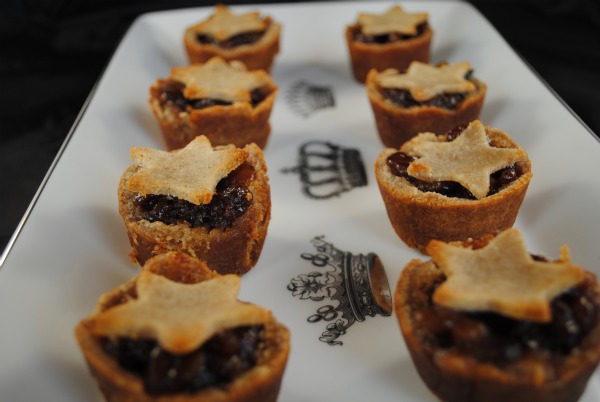 I can’t believe I’m turning into a baker!  I have to say I have a lot of help from people like Kelly at Spunky Coconut.  I’ve adopted her blog this month as part of Book of Yum’s monthly Adopt a Gluten-Free Blogger.  This is a fun event that I love to participate in but often get sidetracked and miss the deadline.

So as many of you know I’m hosting a Boxing Day party at my house for my extended family.  One of the desserts I wanted to make for our wonderful British relatives coming is Mincemeat Pies or as they refer to them and Mince!

I needed a good crust that I could both eat and serve to those who eat gluten.  Kelly has a great recipe for a pie crust on her blog and in her cookbook.  I really liked the fact that it combined both almond flour and coconut flour.  I also learned something new about baking powder, it has corn in it!  Yep.  Could be one of those things that is bothering me and I couldn’t figure out the ingredient.  So I used her grain-free corn-free baking powder recipe.

So I got busy making the dough. 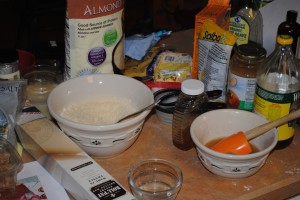 After seeing this photo you’ll know why I don’t bake often.  I’m super messy!  I was of course covered in flours and for some reason when I grabbed an open bag of potato flour it spilled down inside my shirt.  Makes a good body powder.

I followed Kelly’s instructions except I used agave instead of Stevia.  Well I changed one more thing too.  Since I was making these mini pies I rolled out the dough and used my bisquit cutter to make circles that I then pushed into my mini muffin pan.  It worked out great. 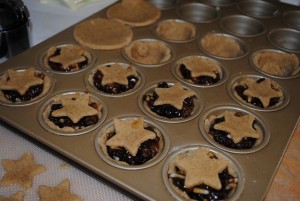 I ended up with 23 Mince Pies.  I also cheated on the mince filling.  I wanted these to be as British as possible so I picked up a Mincemeat mix from Robertson’s at the British Pantry that is sold in the UK.  It’s very sweet but that’s what mince is right.

I think these came out really well.  I did taste one so now there are only 22 left for company.  After they cooled I promptly put them into the freezer to keep safe until Boxing Day.

So the recipe is very simple.  Use Kelly’s pie crust recipe but don’t pre-bake it.  Grease your tin with coconut oil.  Roll out the dough and cut it into circles and place in each muffin space.  Add an overflowing spoonful of mince mix.  Top it off with a star that you have cut from the pie dough.  Bake at 350 degrees for 10 minutes.  There you have it.  Now if you don’t have a mince mix you can always try one of the following recipes from David Lebovitz and BBC.

I hope you will stop over to visit Kelly at the Spunky Coconut.  She has wonderful recipes and tips on how to live gluten-free, casein-free and sugar free.  You’ll also love her newest cookbook, The Spunky Coconut Grain-Free Baked Goods and Desserts: Gluten Free, Casein Free, and Often Egg Free

.  If you have not already read her first cookbook, The Spunky Coconut Cookbook: Gluten Free, Casein Free, Sugar Free

, check that out too.

Now before you head on to your day, it’s your last chance to win a cookbook.  Go to my post on Chipolatas and follow the directions.  Your chance ends at 10pm ET tonight, December 8th.