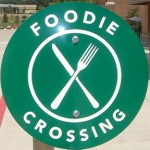 This week’s Secret Ingredient for Friday Foodie Fix is Chicken.  Can it get any easier than that.  I’m expecting great things from you.  If you don’t have a blog I still want to see your favorite recipes in the comments section.

What is a chicken anyway?  Well here is an interesting description I found on Wikipedia on the different terms given to these birds:

“In the UK and Canada adult male chickens are known as cocks whereas in America and Australia they are called roosters. Males under a year old are cockerels.  Castrated roosters are called capons (though both surgical and chemical castration are now illegal in some parts of the world). Females over a year old are known as hens, and younger females are pullets.  In Australia and New Zealand (also sometimes in Britain), there is a generic term chook (pronounced : rhymes with “book”) to describe all ages and both sexes.  Babies are called chicks, and the meat is called chicken.” 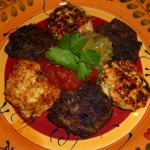 I’m more concerned with how my chickens are raised and what’s the difference between organic and free range and cage free.  Free range means they are not kept in cramped quarters and can move around.  Here’s the U.S. Department of Agriculture definition of these terms in its entirety: “Producers must demonstrate to the Agency that the poultry has been allowed access to the outside.” This doesn’t mean they have to go outside, but have access. Many of the small farms have large areas for their chickens to roam.  If you want to know about your chicken, reasearch the farm online and see how free those chickens really are.

Cage free means they are not cramped on top of each other but it doesn’t mean they are roaming around anywhere.  This term is mostly found on eggs and it really means nothing . Organic means they were not given hormones, antibiotics, no herbicides or pesticides were used in their feed.  I like that the best and if they got to roam free and lived a less stressed life, all the better.

I like to cook with organic chicken.  It’s a nice clean canvass in which you can change a few things here and there and come up with something different every night of the week.  Here are a few of my chicken recipes.  For more, use the ingredient finder on the sidebar and it will take you to more chicken recipes.

Add your original Chicken recipes here if you have a blog or leave them in the comments if do not have a blog.