Baking From The Gluten-Free Almond Flour Cookbook by Elana Amsterdam 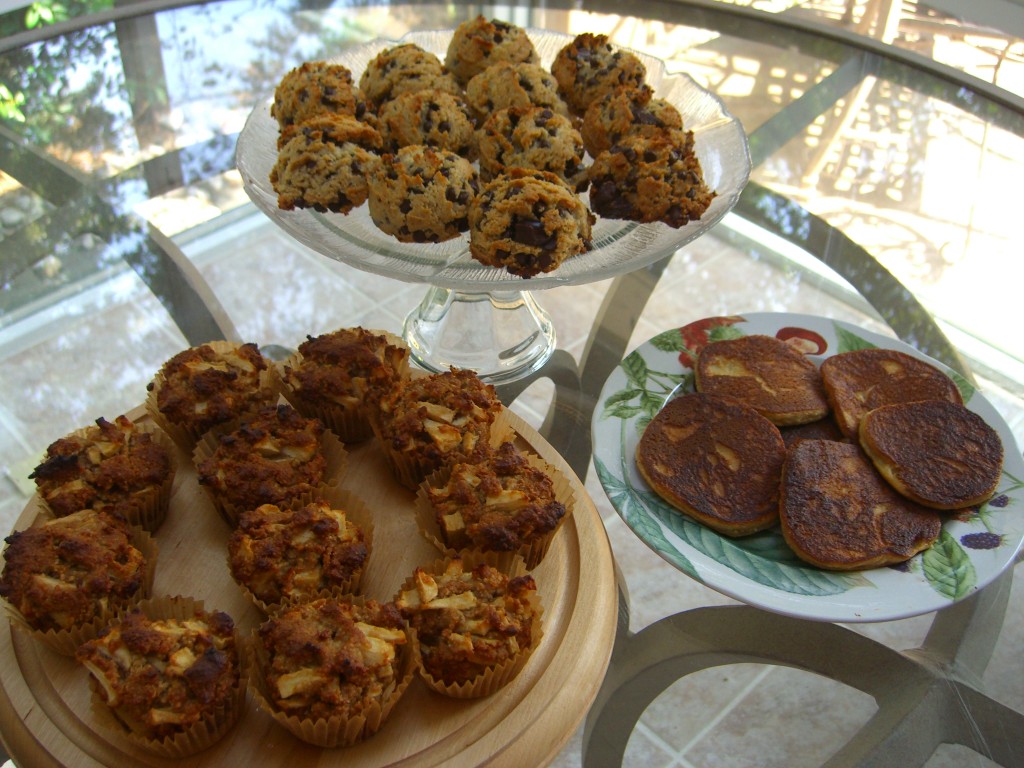 School started and I made a promise to myself that before it did, we would bake and cook some breakfast and dinner items to make life easier on busy days.  Well this past weekend I kept that promise.  We sat down with Elana Amsterdam’s The Gluten-Free Almond Flour Cookbook and started making our plans.  By we I mean me and my son Brad, who is the baker of the family.  He’s starting 10th grade at a school where there’s a long bus ride to get there.  So early mornings and a desire to not cook breakfast every morning was the inspiration for this adventure. 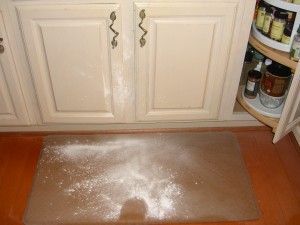 I say adventure because if I’m in the kitchen baking you never know what will happen.  Just take a look at how things started.  I pulled out the arrowroot as I was gathering supplies and somebody didn’t put the lid on tight the last time she was cooking.  Don’t worry she and I had a long talk about that one.  As I pulled it out of the cabinet it flew open and went everywhere including all over me.  You can see my footprint where I was standing and where it’s all over the cabinet doors, it went into the cabinet.  Here is a warning, keep the lid on tight to your arrowroot.  When it spills, it goes everywhere.

So after cleaning that mess up we got busy measuring and baking.  It was a lot of fun to work from Elana’s cookbook.  The first thing I love about this book is the short ingredient list.  I don’t often do a lot of gluten free baking because of the long list of flours needed.  There usually are some I can’t eat anyway.  But these recipes had a short list of ingredients and a short list of directions.  Two things I can handle.

This enabled us to bake Cinnamon Apple Muffins, Cinnamon Coffee Cake, Chocolate Chip Scones, Cheddar Cheese Crackers and Pancakes in just a few hours.  Now there is only one problem with these recipes, they all taste AMAZING! The Chocolate Chip Scones are hunt you down if you don’t give them to me now good.  Believe it or not we still have a few left.  I pulled out 3 from the freezer today and there are two left.  We’ll need to make more of these soon.

Everything we made worked and tastes great.  Now I did cook the coffee cake a little longer and the edges are a little too done, but that was my fault.  Next time I’ll know to stay to the baking time she gave.   I think Brad’s favorite were the Cheddar Cheese Crackers.  He’s the only one who can eat dairy so he doesn’t have to share them.  I did have one just to taste it and they are great.  They really do taste like a Cheez-Its.

This morning I was able to pull out a couple of pancakes and heat them up with a piece of sausage and served that with orange juice.  It took me 3 minutes to make breakfast.  I’m very happy we took the time to make these foods and even happier that they taste so good.  If you live gluten free this is a Must Have cookbook.

Today I finished up with the Chicken Taquitos.  I ended up with 51 to freeze.  I would have had more but I ate the first 3 or 4, OK 5.  I only ate the ones that fell apart. How was I going to bag those.  I cooked the chicken in the crockpot with some dried chili peppers.  When it was done I shredded the meat.  This time to the meat I added pureed chilies.  I followed the same process as I did with the Posole.  This gave the chicken a great flavor.  I added in the usual suspects of cumin, ancho chili, cilantro, salt and pepper.  It was a great mixture for the Taquitos.

The Chicken Taquitos will make their appearance when a quick, I don’t want to cook dinner is needed.  I’m sure that’s right around the corner.

If you have busy mornings like we do, I hope you will take the time to bake up a few of your favorite recipes to have on hand.  It’s really nice to not have to think so early in the morning.

If you have not ordered your own copy of Elana Amsterdam’s The Gluten-Free Almond Flour Cookbook, what are you waiting for.  Do it now.  Go to the top of this blog where it says Store and click to ship.  Or go to her website, Elana’s Pantry and order it from there.  Whatever you do, get your hands on this book! Don’t you just want to lick that icing.