I love to watch The Next Food Network Star each year.  Each week the contestants are given different challenges to test their skills and their culinary point of view.  This year on Season 5, I picked my winner early.  I really liked Melissa d’Arabian.  She was fun, spunky, and didn’t cook in a restaurant.  Her crew of critics was her family.  She is married with 4 girls all under 4.  Can’t even get my brain around that one.  Melissa won and now has her own show.  $10 Dinners on Sundays 12:30pm Food Network.  Check it out today and see what you think.  She makes dinner for 4 people for $10, total cost, not for each person.

Her last show she made North African Meatballs with Glazed Carrots.  She served it with couscous which of course has gluten so we won’t be eating that part.  I thought I would take her recipe and give it the gluten free and dairy free treatment.  It still has to pass the test- Good Food No Matter What!™  While watching her show, what intrigued me the most was the spice combinations.  They were different than what I typically cook, so I wanted to give it a try. 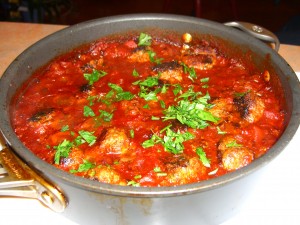 The sauce for this dish has tomatoes with cinnamon, garlic, lemon, wine and briny olives in it, plus many more flavorful ingredients. The meatballs have cilantro, ginger, cumin and cinnamon as part of the ingredient list.

We are not big olive eaters around here but I thought it was too key of an ingredient to leave out so I minced them really fine.  This way, the flavor was infused but we were not biting big pieces of olives.  It worked great.

I did change a few ingredients according to what I had on hand, and took out the gluten and dairy.  Her meatballs were beef and mine happened to be veal.  For the meatballs she also used rolled oats but I didn’t have any gluten free oats on hand so I used gluten free bread crumbs (noted on recipe as option).    I also doubled the amount of tomatoes because I didn’t have a smaller can.  It gave us more sauce and worked out great.  Everything else for the meatballs and sauce was already gluten free and dairy free. 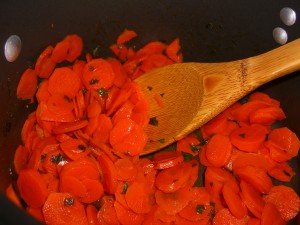 The carrots called for butter but I just left that out.  I did however add in wine, by accident.  I was talking and drinking my own glass of wine and cooking away.  I was supposed to add in chicken stock.  As I’ve said before I need to really pay attention when cooking from a recipe because I just usually look at something and make up my own recipe.  I did add in the chicken stock too.  The carrots still tasted amazing with those two changes.

The real test would be to see if my husband would eat carrots and a sauce with olives.  We both loved this meal.  I served it over rice but you could also make quinoa using the same principle from her recipe for couscous (not gluten free).  She adds in chicken broth and chopped dates.  I think that would taste great with the quinoa and the North African Meatballs on top.

I hope you will give it a try and drop Melissa a note and tell her what you thought.  You can find her on Facebook. Thank you Melissa for sharing foods from all over the world.