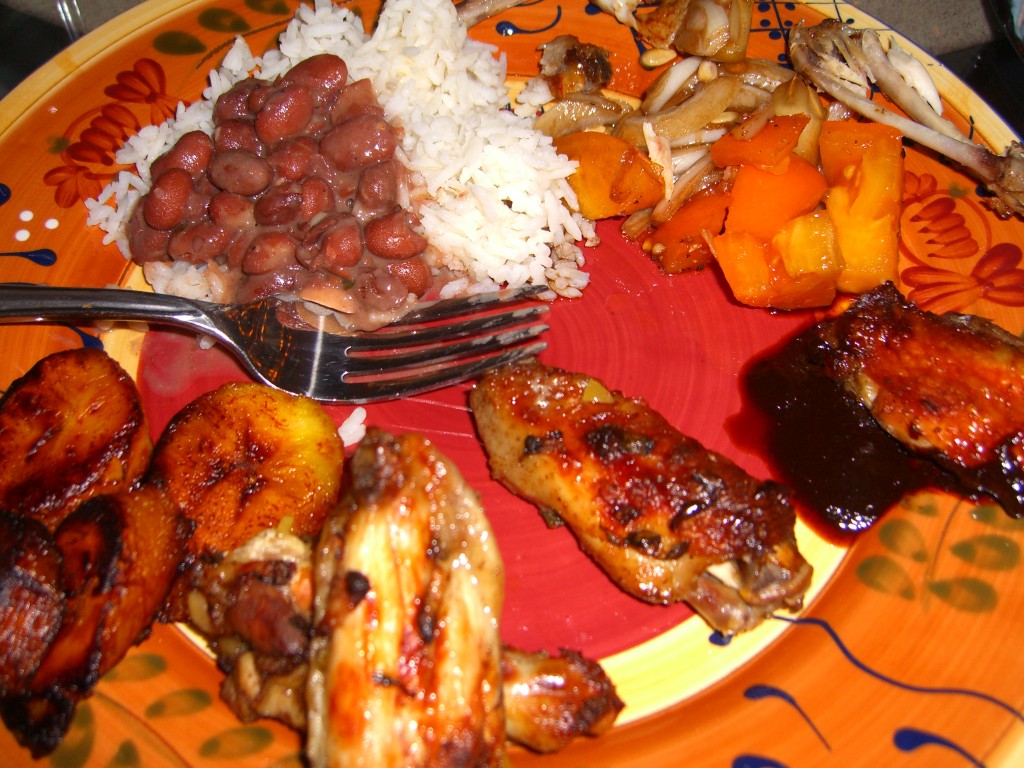 Wow, that’s a mouthful!  I didn’t even add in the Dipped in Picka-peppa Sauce.

We recently had friends over for dinner where I served this Jamaican Jerk Feast.   We were so hungry I almost forgot to take a photo.   I had filled my plate and had already dipped some wings into the Pica-peppa sauce.  I served this up with a tomato, onion and cucumber salad to balance out the spicy beans.  The meal was finger licking good.  I made so many wings that we couldn’t eat them all.  They of course are waiting in the freezer for a quick meal this week.

If you have never tried Jamaican foods, start with Jerk.  Jerk is typical seasonings that is used for chicken and pork.  I like it on fish and beef as a topping more than a marinade.  Rice is a typical side dish but the beans that accompany the rice are usually pigeon peas.  I only had red beans so that’s what we had.

Let me stop and expand on that last point.  If a recipe calls for something unique like pigeon peas and you have another bean that you’ve already paid for, use that.  Now it will taste different but it will taste good.  When you are out and about and find that ingredient then pick it up for the next time you make that recipe.  Using what you have on hand will save you time and money.

Back to the meal.  I cooked the rice in my rice cooker with water but you can use a stock to give it more flavor.  I wanted it very plain because I knew the beans would have a kick.  The Jerk could have been hot too but it was a medium heat.    Make sure you check things before you serve them so you can warn people.  The plantains are sweet and are a nice contrast to spicy beans too.  I hope you will give it a try.  To see the recipes, click at the bottom of the poll to continue.

Mix everything except the chicken in a bowl.

Get two large plastic zip lock bags and put one inside the other.  Put the chicken wings into the inside bag and pour the marinade over top.  Close tight.  Work on getting as much of the air out as you can.  Now close the outside bag.  Give the bag a toss and mix all of the marinade around all of the wings.

Put into the refrigerator for 5 – 24 hours.  The longer they can hang out together the more the seasonings can penetrate the chicken.

If you don’t have the liquid from cooking hot peppers in vinegar you can always add vinegar to the marinade.  You can also add more peppers but 6 Scotch Bonet is a lot.

Pre-heat your oven to 425 degrees.  Put the wings onto a baking sheet in a single layer.  Cook for 45 minutes.

Let your beans soak overnight.  Drain them and put into a pot with enough water to cover.  Add in the peppers with bacon grease and bring to a boil.   Turn down to low and cook for 2-3 hours until soft.  If you are using bacon, chop it and cook it to render the fat.  You can remove the bacon or leave it in when cooking the beans.

You can also use stock instead of water.  I find the bacon and peppers add enough flavor and the stock is not needed.

When you serve you can toss in chopped green onions. 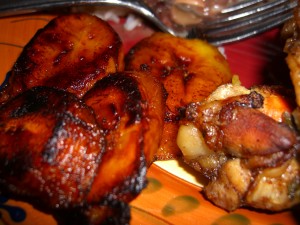