Our local zpizza started selling their new gluten free pizza.  My 15-year-old son was very excited to try it out.  When we called at 5pm, they said they were out of gluten free pizza.  Well after being extremely disappointed, we gave it another try after waiting 4 days.  We rotate the foods we eat every 4 days.  This time I called before lunch to make sure one would be saved and was told their shipment of gluten free crusts had not arrived but was due in today, call back later.  Argggg.  How hard is it going to be to get this pizza and is it worth it?  So, being the wonderful mom that I am, I called back and they had come in so I placed my order.  We went to pick up our two gluten free pizzas, one plain and one with pepperoni.  I thought I better get some while I can and maybe freeze the leftovers.

Little background on zpizza.  They opened in 1986 in Laguna Beach, CA looking to create a lighter and healthier pizza.  Ok, now I know why I’ve always been drawn to their pizzas. They tasted good and I love Laguna Beach.  We used to eat them all the time before going gluten free.  I need to get talking with this company to create gluten and dairy free pizzas.  Hmmm, I wonder what’s in their soy cheese?  I’ll contact the company and see what information I can gather.  I’ll let you know when I hear back. 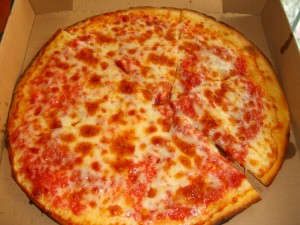 We watched them put it into the oven to be cooked.  I asked how they kept things separated.  They told me they used separate pans under the pizza that were only for the gluten free pizza.  Now I didn’t get to watch them make it so I don’t know if they have a separate cheese and toppings area.  For me, this would be important.  If there is any cross contamination, I get very sick.  But since I don’t eat dairy, this pizza was for my son and not me, and he doesn’t get sick.  He eats 99% of his meals from my dedicated kitchen so an excursion out is a risk he’ll take.

So tonight he’s asked for another pizza.  He’s having a friend over and he now he can have “normal” friend over food.  I’m not sure if they have any crusts left but if they do, they’ll be eating gluten free pizza for dinner!