I tried a new recipe tonight.  The verdict from my husband: “tastes good but it’s like Mexican spam.” I’ve never made tamales before but I thought I would give a tamale casserole a try.  It wasn’t too hard to mix up and I filled mine with cooked ground pork.  The recipe is from Eating Well and the original was made with shrimp.  I didn’t want to waste my expensive shrimp on something I’ve never tried before.  I think it would have tasted better if I would have followed my instincts and seasoned the pork instead of leaving it plain like the recipe called for.  We served it with organic refried beans and topped it off with Trader Joe’s Salsa Verde but you can make the Three Sisters Black Mole that is suggested.  This is a very low cost gluten free, casein free, soy free meal.

If you give their recipe a try please let me know what you fill it with and how it turns out. 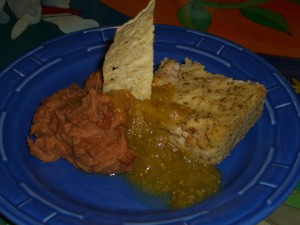